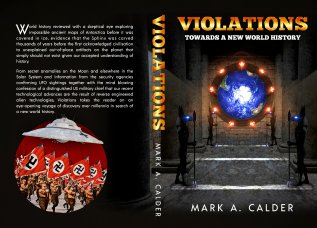 Violations provides an alternate world history exploring conspiracy theories from ancient history, the lost city of Atlantis to the most popular conspiracy theories and UFO sightings. It's about one of the most famous conspiracy theories that has gripped our planet for tens of thousands of years. The clues are startling; and ancient map of Antarctica before it was covered by ice, scientific evidence that the Sphinx was carved thousands of years before the first acknowledged civilisation, geological evidence of a world catastrophe 12,000 years ago, and detailed memos from the FBI confirming UFO sightings and the mind blowing confessions of a US military chief that our recent technological advances are the result of the reverse engineering of alien technologies.

The content of this website started as jottings from reading and other research undertaken as a hobby/interest about answering puzzles in respect of Earth's alternative history. And the information collected grew. And grew. Then, after a number of years, it stopped growing and started collecting dust. More recently I decided that the information, whether accepted or rejected by its readers, should be made available to a wider audience to stimulate discussion, debate and to distil what has been collated so far into something that further reflects the truth. This is not a commercial enterprise, nor the promotion of a type of belief. Certainly, some of the topics covered are not "mainstream" but then mainstream has never been able to resolve certain historical puzzles - thus the start of the project.

The information presented comes from a wide range of sources; some academic, some popular, some personal. Hopefully everything that is presented is fact, but we would willingly jettison whole sections of this work should opposing verifiable facts be produced. The truth is more important than any piece of this work. Please contact us through this site with new/additional/conflicting information with source references. The VIOLATIONS website is keen to publish new 'alternative world history material'. Become part of this community by 'publishing' your articles here on this site. Simply click on CONTACT and attach your referenced material. Any other  thoughts, views or other feedback will be similarly welcomed. Be part of this endeavour. You can now buy a copy of this book in either paperback or Kindle formats by clicking on the Amazon links above.