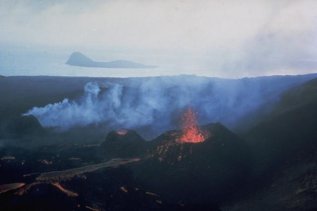 More recently, on 14th November 1963, the skipper of a fishing boat off the south coast of Iceland radioed his base to report a large cloud of black smoke rising from the sea. He and his crew went on to watch as a huge explosion sent rocks hurtling into the sky, before a black land form emerged from the ocean depths. Within twenty-four hours the new island was higher than a house, and within a week its peak was 200ft above sea level. Eruptions continued and, by 1967, the new island, named Surtsey (above) named after the Norse god fire god Surtur, had reached a height of 500 foot and was over a mile long. Today, colonised by birds and vascular plants, the island stands as proof that new land can emerge from the depths as quickly as an old one can sink into legend:- and there is evidence to suggest that some of the land now under water around the Azores was once above sea level, lending further support to the idea that these islands could have been the home of a lost civilisation.

But for a civilisation, there would not only have to be land but lost artefacts discovered on that land, and, again there is some evidence that such artefacts have been found. One such find was made by the crew of the SS Jesmond, a British merchant vessel of 1,495 tons that set off for New Orleans from Messina in Sicily at the end of the nineteenth century. In March 1882 the ship passed through the Straits of Gibraltar into the open sea. Some 200 miles west of Madeira, and a similar distance south of the Azores, the crew observed numerous dead fish and muddied waters. Later the same day smoke was observed, although it was assumed to be from another vessel. The following day, there were even thicker dead deposits of fish and the smoke was more visible, appearing to come from a land mass where charts and maps indicated there should be open waters. The Captain of the Jesmond, David Robson, (Master's Certificate No 27911 in the Queen's Merchant Marine), cast anchor about 12 miles from the newly formed landmass, but far from sinking thousands of fathoms as the maps indicated, the anchor hit the sea floor after only seven fathoms.

Robson subsequently took a landing party ashore the new island to explore. When the ship ended its journey and docked in New Orleans and Robson gave an account of his findings to a reporter from the Times Picayune. He described how they had uncovered crumbling remains of massive walls and recovered artefacts including "bronze swords, rings, mallets, carvings of heads and figures of birds and animals, and two vases or jars with fragments of bone, and one cranium almost entire ... [and] what appeared to be a mummy enclosed in a stone case ... encrusted with volcanic deposit so as to be scarcely distinguished from the rock itself (6).

Robson advised the reporters who examined his finds that he intended to donate them to the British Museum, however at that point verification of these claims becomes difficult for the log of the SS Jesmond along with the offices of the ship's owners, Watts, Watts and Company was destroyed during the London blitz of September 1940. The British Museum now has no record of any such donation from Robson (7). Despite this lack of corroboration, there is other supporting evidence of Robson's discoveries. The unfortunately named Captain James Newdick of the steam ship Westbourne was sailing from Marseilles to New York during the same period when it reported sighting a large uncharted island in the area where Robson had landed. Other captains also reported floating fish which were eaten by the sailors, indicating that the fish's demise was sudden and not the result of some epidemic disaster (8). 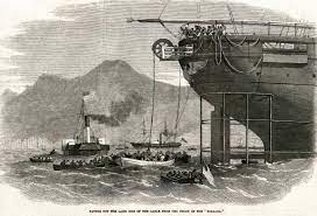 History has also revealed that just as lands have emerged from the depths in that area, other land now under water was once above sea-level. One such piece of evidence was uncovered during the 1898 laying of a transatlantic cable (above). As during earlier attempts, the cable snapped and the workers were required to pull it to the surface for repairs. This incident occurred some 500 miles to the north of the Azores.Whilst searching for the cable, the sea floor in the area was found to be composed of rough peaks, pinnacles and deep valleys, more reminiscent of land than the expected sea bottom. Grappling irons brought up rock specimens from a depth of 1700 fathoms. These rocks proved to be tachylyte - vitreous basaltic lava that cools above water under atmospheric pressure (9).

According to Pierre Termier, a French geologist who made a study of the incident, if the lava had solidified under water it would have been crystalline instead of vitreous (10). Termier further surmised that the lava had been submerged under water soon after cooling, as evidenced by the relative sharpness of the material brought up. Although it cannot be ascertained exactly when this occurred, it was certainly within the last 15,000 years as lava decomposes in that time. Further evidence of more recent underwater activity comes from a discovery in 1923 when technicians from a Western Telegraph ship searching for a lost cable in the Atlantic detected that the rising ocean bed had thrown up the cable by 2.25 miles in only twenty-five years (11).

In 1949, Professor M Ewing of Columbia University was exploring the mid-Atlantic ridge. At a depth of between two and three and a half miles, he discovered pre-historic beach sand. This puzzled Ewing, as sand, being the product of erosion should be non-existent on the seabed. The conclusion reached was that either the land sank, or the ocean level was much lower in a past epoch (12). There are other interesting finds. In the course of a submarine probe by the Geological Society of America in 1949, about a ton of limestone discs were lifted from the bed of the Atlantic, just south of the Azores Island chain. Their average size was about 6 inches with a thickness of 1.5 inches. The discs had a peculiar cavity in their centre. On the outside they were relatively smooth, but, in the cavities, they were rough.

These sea-biscuits as they were called, did not appear to be a natural formation and could not be identified. According to the Lamont Geological Observatory (Columbia University) "the state of lithification of the limestone suggests that it may have been lithified under subariel conditions and that the seamount may have been an island within the past 12,000 years." (13). Other claims that the Azores may have been the location of a lost civilisation were supported by alleged sightings in the area of underwater buildings and entire 'cities' made from aircraft as far back as 1942. These sightings first started when air ferry pilots flying from Brazil to Dakar glimpsed what appeared to be a submerged city on the western slope of mountains in the mid-Atlantic ridge.