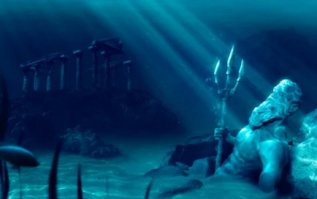 Nearly all of the 'lost civilisation' theories have become associated with the legend of Plato's 'Atlantis', thus the concept and its study have been largely ignored by the serious academic community. Yet ironically it is probably the legend of Atlantis itself, however fanciful, that has provided the foundation for the belief in the existence in a pre-historic civilisation to account for the out-of-place knowledge and artefacts detailed in previous chapters. Yet if there was a 'lost civilisation' (regardless of its connection with or not to the Atlantis legend) it would have had to have had a home, and any identified location would have to provide supporting evidence that a civilisation actually did live there, for, as Egyptologist Mark Lehner rightly points out, without evidence of remains, it would be safer to conclude that that there was no former civilisation, and the purported clues to its existence would have to be explained in some other way.

Many locations for the lost civilisation have been suggested with many of them centring on the Mediterranean area. A Dr. James Mavor set out one theory in his 1969 book, believing that the lost peoples were a Minoan civilisation. This followed earlier claims first set out in the 1930s by Greek scientists Dr Angelos Galanopoulos and Professor Spyridon Marinatos. There is certainly some evidence to support Thera, an island near Crete in the Mediterranean, being the location of an early civilisation. Professor Marinatos, under the auspices of the Archaeological Society at Athens, began a systematic excavation of a town on the island, Akrotiri in 1967, after evidence of early habitation had been discovered there in the second half of the 19th century. 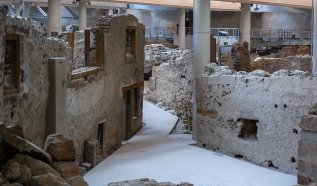 These excavations confirmed that Akrotiri (above) had been one of the most important prehistoric settlements of the Aegean, and the various imported items discovered indicated a wide network of external relations. Not only was Akrotiri in contact with nearby Crete but it also communicated with mainland Greece, the Dodecanese, Cyprus, Syria and Egypt. However, it appeared that the town's life came to an abrupt end in the last quarter of the 17th century BCE when the inhabitants were forced to abandon their homes as a result of severe earthquakes. An eruption of the island-volcano Thera followed, with volcanic materials covering the entire island and the town itself, preserving the buildings (above) and their contents forming an intriguing time capsule just like as at Pompeii. 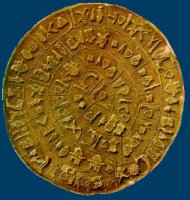 Despite evidence of early civilisation, the evidence was not early enough, with the first signs of habitation being from the late Neolithic times (c. 4th millennium BCE.) Attention therefore turned to Crete itself, Thera's much larger neighbour, and a popular choice for the home of the 'missing' civilisation. A ceramic disc (above) had been found at Phaistos on Crete which was around 3700 years old, however made from a clay not indigenous to the island, indicating that Crete had certainly been visited by that time. Indeed, other evidence suggests that the island was in fact occupied at least by 6000BCE; indicating the existence of a sea faring people who had boats that could be rowed out into open sea. Whenever the civilisation started, history records that by 1500BCE Crete had become the centre of a seafaring empire. However, within a very short time, this empire collapsed along with its infrastructure. In all probability this collapse was caused by the eruption of a volcano that destroyed the nearby island of Thera and also deposited layers of ash that would have destroyed harvests for decades. The eruption is also known to have triggered off a substantial tidal wave.

These events appear to fit the story handed down by Plato of the island paradise, Atlantis. Indeed the volcano at Thera erupted exactly 900 years before Solon received the original story of Atlantis from Egyptian priests leading to some concluding that Plato might have got his figures wrong; he should have referred to Atlantis being destroyed 900 years previously, not 9000 years. There were other indications that Crete could have been the legendary Atlantis. Crete was well known to the Egyptians as Keftui, a land that was "the way to other islands and the continent beyond" exactly as Plato described Atlantis.