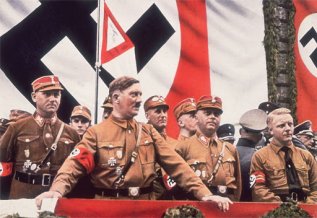 The fact that the Germans were developing advanced technologies during the end of the war is a matter of public record. As Sir Roy Feddon, Chief of the Technical Mission to Germany for the Ministry of Aircraft Production stated in 1945. "I have seen enough of their designs and production plans to realise that if they (the Germans) had managed to prolong the war some months longer, we would have been confronted with a set of entirely new and deadly developments in air warfare." Captain Ruppelt, Chief of the US Air Force Project Bluebook added in 1956, "When WWII ended, the Germans had several radical types of aircraft and guided missiles under development. The majority were in the most preliminary stages, but they were the only known craft that could even approach the performance of objects reported to UFO observers." 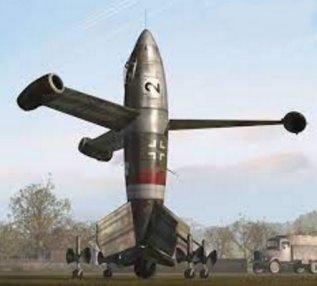 Some of these German war-time technical advances were well known. The first military jet was the German Heinkel 178 that flew in 1939. In 1943 the Germans also deployed the only jet fighter to go into regular service during the war, the Messerschmitt 262. This jet could easily overtake the fastest Allied aircraft, yet fortunately Hitler ordered that these planes should be fitted as bombers rather than defensive fighters which saved Allied aircraft from devastating casualties. Then Heinrich Focke was involved in the design of and production of the FW6, Fa223, Fa226, Fa283 and 284 models during the war. He designed a propulsion system known as the 'turbo-shaft', which is still used in most helicopters today. Using this technology, Focke designed the upright, vertical take-off aircraft (above), which was just coming off the drawing board as the war ended. At the end of each of the three long arms of this technologically advanced craft was a small jet propulsion unit. The rotating arms were used to lift the body from the ground like the blades of a helicopter.

Cruise missiles were also first used by the Third Reich and V-1 bombs were launched from German occupied territories across the channel into England. The next German rocket, the V-2 proved to be the predecessor of the Intercontinental Ballistic Missiles that filled the arsenals of the former Soviet Union and US during the Cold War. This missile could travel 225 miles at five times the speed of sound and a single hit could take out a city block. The Germans also developed a rocket-powered fighter, the ME 163 and although it was never put into regular service, it was the first aircraft to fly faster than 600 miles per hour. These then, were some of the known German advances. However there were also hints of darker technologies not fully understood. It was in 1944 that knowledge of these became public for the first time when the New York Times of 14th December reported "Floating Mystery ball is New German Weapon. 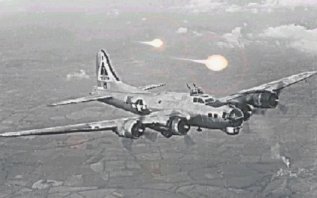 "Supreme Headquarters, Allied Expeditionary Force, Dec 13 - A new German weapon has made its appearance on the western air front, it was disclosed today. Airmen of the American Air Force report that they are encountering silver coloured spheres in the air over German territory. The spheres are encountered either singly or in clusters. Sometimes they are semi-translucent." (1) A typical incident was reported by a veteran pilot of the 415th Night Fighter Squadron. He was flying a mission over Hagenau, Germany on 22nd December 1944 when at 6.00am, whilst flying at an altitude of ten thousand feet, the pilot and his radar operator saw two "large orange glows" rapidly climbing towards them. "'Upon reaching our altitude' the pilot reported, the objects 'levelled off and stayed on my tail.' He went into a steep dive and the 'glows' followed in sharp precision. He banked as sharply as he dared and the objects followed. For two minutes the 'lights' stalked the fighter through several intricate manoeuvres, peeled off under perfect control, then blinked out." (2)

The purpose of these strange objects was a mystery, for they merely followed warplanes, but apparently never opened fire or otherwise attacked them. These objects were named 'Foo Fighters', a term which came from a headline 'Where There's Feu, There's Fire.' Each side in the war seemed to believe that the Foo Fighters were the inventions of their enemy and several reconnaissance missions were launched to gain further information. To date, it has never been clearly established where the technology came from, and the origins of the foo-fighters remain an historical puzzle alongside the Scandinavian ghost rockets. What was clear, however, was that it wasn't Allied technology, and that was a serious cause of concern.