In 1980 Hollywood TV producer Jamie Shandera was undertaking research for a film on UFOs. Four years later he received a package through the post; a roll of undeveloped 35mm black and white film possibly from one of the contacts he had made within the US military establishment while working on the film. Intrigued, Shandera had the film processed. It appeared to reveal an eight-page briefing paper prepared on 18th November 1952 for the then President-elect Dwight D. Eisenhower by Rear Admiral Roscoe Hillenkoetter (a believer in UFOs) and a 24th September 1947 memo from President Truman to Secretary of Defense James Forestall (who was later to commit suicide, some claiming as a result of the horror of the 'alien problem') supposedly authorising the setting up of a group to be known as MAJESTIC-12.

This committee (below), according to the documents, was set up by Truman to deal with the aftermath of Roswell and the recovery from that site of an Extraterrestrial Biological Entity (EBE). If the documents were genuine, then the lid had been blown off the secrecy and cover-up that had been in place since the end of the Second World War. Majestic 12 or MJ-12 was allegedly comprised of some by now familiar names: 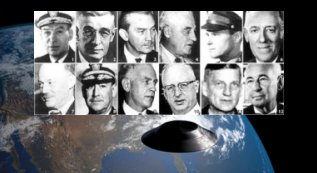 Dr. Vannevar Bush: identified by Walter Smith as leading US enquiries into the flying disk phenomenon and Joint Research and Development Board Chairman.

James Forrestal: Secretary of Defense who met with Byrd on his return from Operation Highjump, and who was later to commit suicide.

Rear Admiral Roscoe Hillenkoetter: Third Director of the CIA which was established the same month as Majestic-12 (MJ-12).

General Nathan Twinning: Twinning had already put in writing in 1947 that in his opinion "the phenomenon reported is something real." Interestingly, on 8th July 1947, the day of the first press release announcing the recovery of a crashed disk at Roswell, Twinning cancelled a planned trip to the west coast citing a "very important and sudden matter." Researcher William Moore established that Twinning spent the next few days in New Mexico (1).

General Hoyt Vandenberg: The second director of the CIA who had ordered a report by the Air Technical Intelligence Centre that concluded UFOs were interplanetary in origin be destroyed.

Dr Jerome Hunsaker: An aircraft designer He headed the Departments of Mechanical and Aeronautical Engineering at the Massachusetts Institute of Technology and was also Chairman of the National Advisory Committee for Aeronautics.

Dr Donald Menzel: Director of the Harvard College Observatory who had a long association with the National Security Agency and who was a Naval Intelligence cryptography expert. Menzel had been a consultant to several US Presidents on national security affairs (2)

General Robert Montague: Base commander at the Atomic Energy Commission installation at Sandia Base, Albuquerque, New Mexico between July 1947 to February 1951. Montague had also been General Twinning's classmate at West Point, and Commandant of Fort Bliss with Operational Control over the command at White Sands. There he was head of the Special Weapons Project. (It is interesting to note that on 27th July 1948 at 8:35am a UFO was seen by a scientist whilst driving through the streets of Albuquerque. He reported seeing for ten minutes a flat, circular object that seemed to be a metallic disk motionless in the sky. The witness, in addition to his scientific training, also had more than two thousand hours of flight as a navy pilot under his belt and was familiar with standard aircraft (3).

Rear Admiral Sidney Souers: The first Director of Central Intelligence (January-June 1946) who in September 1947 became Executive Secretary of the National Security Council. Souers resigned from the group in 1959 however was retained as a special consultant to the Executive on security matters.

Gordon Gray: Assistant Secretary of the Army at the time MJ-12 was allegedly established and chairman of the CIA's Psychological Strategy Board. Later specialising in security matters, he became chairman of a highly secret '54/12 Group' or 'Special Group' formed during the early days of the Eisenhower administration (4).

Dr Lloyd Berkner: A geophysicist who was the Executive Secretary of the Joint Research and Development Board in 1946 under Vannevar Bush. He was later to become a member of the Robertson Panel and headed a special committee to direct a study that led to the establishment of the Weapons Systems Evaluation Group.

Dr Detlev Bronk: A physiologist and biophysicist, Bronk was head of the National Academy of Science and Chairman of the Medical Advisory Board of the Atomic Energy Commission. Together with Edward Condon, Bronk became a member of the Scientific Advisory Committee of the Brookhaven National Laboratory.