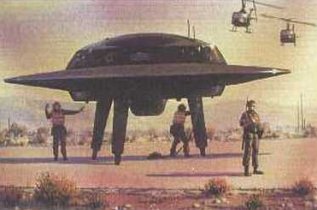 Over the years fact and fiction regarding the exact nature of these advanced German technologies have become fused, however it is now clear that the Germans were developing craft that could be mistaken for what would nowadays be considered UFOs. In fact, such developments make perfect sense. Each side during the war relied heavily on their aerial capabilities, and one sure way to disable such abilities was to take out enemy runways. Either side could have had the best air fleet on the planet, but without somewhere to take off from, such a fleet was impotent. Therefore the development of craft that did not require any runway, like Focke's designs, could potentially alter the eventual course of the war. As it turned out, the designs were only coming on line as the war ended, but had the conflict continued, it is conceivable that these new technologies could have altered the shape of history. However, exactly what was being developed is now less a matter of historical record, and more of an historical jigsaw, with not only pieces missing, but other pieces conceived in the minds of writers who then peddled fictitious Nazi flying saucer myths to those who chose to believe them.

Establishing fact from fiction from over seventy years ago is no easy matter, and we are forced to consider information that is largely unverifiable. Yet when pieced together a plausible story of Nazi flying disk technology does begin to emerge. One person who made claims regarding the development of 'flying saucers' in Nazi Germany is former Luftwaffe Flight Captain and aircraft designer Rudolph Schriever. He claimed in 1950 that he and a small team had worked at facilities near Prague developing a saucer-type vehicle. This story first appeared in Der Spiegel magazine on 30th March 1950 in an article entitled 'Untertassen-Flieger Kombination' which stated "Rudolph Schriever, who says engineers throughout the world experimented in the early 1940s with flying saucers, is willing to build one for the United States in six to nine months. The 40-year-old Prague University graduate said he made blueprints for such a machine, which he calls a flying top, before Germany's collapse and that the blueprints were stolen from his laboratory. He says the machine would be capable of 2,600mph with a radius of 4,000 miles, Schriever is a US Army driver at Bremerhaven." (3)

His claims are backed up by a 1975 Luftfahrt International Report that noted that after Shriever's death in the late 1950s, papers found amongst his belongings revealed incomplete notes for a large flying saucer, a series of sketches of the machine and several newspaper clippings of himself and his alleged flying saucer. Up to his death, Schriever had repeatedly claimed that the UFO sightings since the end of the war were proof that his original ideas had been taken further with successful results. Researcher Bill Rose was able to discover that Schriever was involved with other scientists Klaus Habermohl and Giuseppe Belluzzo (an Italian engineer) as well as one Dr. Walter Miethe. Rose's research established that Miethe had been the Director of the saucer programme at two facilities located outside Prague. We know little more about Miethe's activities at this time him but it does seem that he knew Wernher von Braun (of whom much more later) as there is a photograph of them together in 1933. 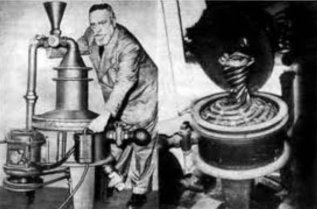 We certainly do know that one scientist, Viktor Schauberger (above), was involved in the production of flying disks, and that he flew one in 1945 near Prague, just as Schriever had claimed. His experimental prototypes were based on levitation. Born in 1885, Schauberger considered the natural world his greatest teacher although many in the world considered Schauberger to be somewhat deranged. In forests, alongside rivers, he studied what he considered life-enhancing energy, water and air vortices. He argued that "Prevailing technology uses the wrong forms of motion. It is based on entropy - on motions which nature uses to break down and scatter materials. However, nature uses a different type of motion for creating order and new growth. The prevailing explosion-based technology - fuel burning and atom splitting - fills the world with expanding, heat-generating centrifugal motion."

Schauberger believed that energy production could instead use inward-moving cold-generating centripetal motion, the same as nature employs to build and enliven substances. Even hydroelectric power plants, Schauberger said, use a destructive motion - they pressure water and chop it through turbines. The result is 'dead water'. He built suction turbines that he considered enlivened and invigorated, resulting in clean, life-giving water downstream. Schauberger also produced electrical power from a unique suction turbine using implosion principles and was later pressured into developing a propulsion system using the same principles applied to air. His work came to Hitler's attention and his son recounts the meeting between his father and Hitler: "In June of 1934 my father was invited by the Reich's Chancellor Adolph Hitler to discuss his work. Hitler wanted to know about his discoveries and talk about the various possibilities and what his great plan was. And he said 'yes, I'm looking for a new technology that must once again harmonise with the natural order of things and that is my real programme.' Shortly before the meeting, Hitler as Reich Chancellor gave the two deputies his orders. The two had come to discuss Herman Goering's plan. And he said 'Viktor Schauberger, you will speak with the two Reich's deputies and tomorrow or by the latest the day after tomorrow a second meeting will take place."

"And he said to the two deputies 'I find the plan fascinating. Yes, we Germans will bring about a whole new science.'" (4) Hitler wanted Schauberger to supervise the building of a new flying craft that could levitate without burning any fuel. This idea for this new craft was based upon a discovery made by Schauberger a few years before of how to develop a low-pressure zone at the atomic level. The scientist claimed to have achieved this in a laboratory setting when his prototype whirled air or water 'radically and axially' at a falling temperature. Schauberger named this resulting force as 'diamagnetic levitation power' and noted that nature already used this direct or 'reactionary' suction force in weather generation, solar fusion stability etc.