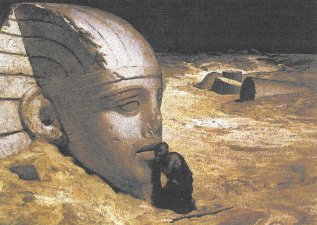 According to legend, nearly three and a half thousand years ago, one of the sons of the Egyptian Pharaoh Amenophis II was out hunting near a plateau some ten miles from Cairo. Tired from his endeavours, the Prince Thutmose rested in the shadow of a mysterious head protruding from the desert sands.Thutmose duly fell asleep and, in a dream, heard the carved stone head whispering to him that one day he would become ruler of all Egypt ahead of his older brothers. The prince was also told that he would then free the body of the forgotten god from the desert sands where it had lain buried for centuries. Thutmose awoke refreshed, and, recalling the dream silently committed himself to clearing away the sands, intrigued that as a younger son, he could possibly become Pharaoh. He then left to continue his hunting.

Thutmose duly fell asleep and, in a dream, heard the carved stone head whispering to him that one day he would become ruler of all Egypt ahead of his older brothers. The prince was also told that he would then free the body of the forgotten god from the desert sands where it had lain buried for centuries. Thutmose awoke refreshed, and, recalling the dream silently committed himself to clearing away the sands, intrigued that as a younger son, he could possibly become Pharaoh. He then left to continue his hunting. On the death of his father the prophecy become true, with the former hunter ascending the throne as Pharaoh Tuthmosis IV. Shortly afterwards the Pharaoh, who was only to reign for eight years (1413-1405BCE), honoured the pledge made as a younger man and cleared the area around The Great Sphinx revealing the God in its true magnificence. (1) Check out Thutmose's tomb in the video below.

This enigmatic clue to the existence of a lost people and world was supposedly constructed during the lifetime of the Pharaoh Chephren around 2550 BC (2). However there is no actual evidence to support this dating; the link with Chephren has been assumed given that The Great Sphinx shares the Giza plateau with the Ancient Egyptian Pyramids of which the greatest was believed to have been built by Chephren. It was also believed that the 'face' of The Great Sphinx depicted Chephren himself. However over two thousand years later in the 1940s suggestions were being made that The Great Sphinx may well be much older than that, possibly by thousands of years. The first to propose this was the French scholar Rene Schwaller de Lubicz (1891-1962).Schwaller had moved to Egypt in 1936 and had stayed there for 15 years studying the temples, particularly the Temple of Luxor. His initial research was published in 1949 and a fuller account of his findings was published in 1957. (3) 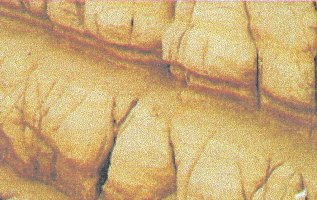 During Schwaller's time in Egypt he also examined The Great Sphinx and noted that it was badly eroded. Whilst this was not a new observation, Schwaller's conclusion was; for he believed that the erosion had not been as a result of the wind (which would have cut sharp, straight patterns into sediment layers), but from water. He pointed out that the erosion on The Great Sphinx (above) was clearly the rounded and furrowed contours typical of water erosion. The implications of Schwaller's observations were not immediately realised, for data regarding rainfall in Ancient Egypt was not widely available at that time. However, it is now known that Ancient Egypt experienced torrential rainfall, with some interruptions, from about 10,000 to 5000 BCE. This rain came to a complete end by the middle of the third millennium. (3)

This meant that if the erosion on The Great Sphinx was indeed as a result of water rather than wind, then the Sphinx must have been carved at least two and a half thousand years before it's accepted date, possibly even much longer if weathered for thousands of years. The inevitable conclusion from this was startling; the construction of the Sphinx predated the Egyptian civilisation by thousands of years. Perhaps understandably, orthodox archaeologists and Egyptologists refused to even consider Schwaller's hypothesis. 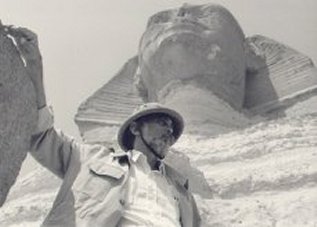 His work then languished in relative academic obscurity until it came to the attention of independent Egyptologist John West who later published his own book 'Serpent In the Sky: the High Wisdom of Ancient Egypt' (5). After rigorous examination, West agreed with many of Schwaller's earlier findings and concluded that The Great Sphinx did indeed predate Egyptian civilisation. Such confirmation again threatened to cast accepted world history into confusion, but this time its proponent was not to be easily dismissed. West was fully aware that world history as we know it centres on the Egyptian culture being founded around 3000 BCE. So the question was again raised. If the early Egyptians had not built The Great Sphinx, then clearly some other peoples had.

And not only had someone else built the Sphinx, but they had done so thousands of years before there should have been a people civilised enough to undertake the task and there was certainly no obvious evidence that such a people had existed. Inevitably this was all too much to bear and West's work was also consigned to the 'best left alone' fringe and considered little more in academic circles as had Schwaller's work earlier in the century. But West wasn't prepared to be dismissed so easily. By the 1980s he had interested a respected geologist from the University of Boston, a Dr. Robert Schoch. Schoch was a highly respected stratigrapher (a geologist who studies layers of rock) and palaeontologist and author of four published books.

Schoch explains his involvement. "I grudgingly got involved in the whole controversy as a favour to a couple of fellow academics at Boston. I was persuaded to get involved by Robert Eddy, Professor of Rhetoric at Boston, and an old friend of West. I was told West wanted an 'open minded' geologist to help explore his theory. I heard West out, but did not think there was much chance he was correct in suggesting that the Sphinx was older than its standard attribution – until I got to Egypt." (6) Schoch carried out a clinical assessment of West's claims and was mindful of suggestions that if the erosion was indeed caused by water, then this could be attributed to more recent flooding of the Nile, and therefore no earlier redating was required.