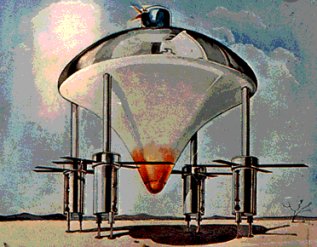 This list is supplemental to episodes detailed in Towards the Sky, a gives a further selection of alien encounters from the many thousands reported over the past few centuries.

BCE 593 Ezekiel witnesses event which some writers have claimed sounds suspiciously like a UFO encounter. Josef Blumrich, former chief of the systems layout branch of NASA, set out to disprove such suggestions, however, from a careful analysis of the data available, he concluded that the vehicle described in the Bible actually was a UFO. His schematic is shown here.

CE 218 In Julius Obsequen's book Prodigiorum Liber there are reports of a shield flying through the sky, two moons seen at night, ghost ships in the sky and luminous lamps at Praeneste.

BCE 213 In Hadria, an 'altar' was seen in the sky, accompanied by a man in white clothing.

CE 60 A 'ship' was seen speeding across the sky at night in Scotland.

CE 763 While King Domnall Mac Murchada attended the fair at Teltown in Meath County, ships were seen in the air.

CE 776 A translation of Annales Laurissenses reads: "Now when the Saxons perceived things were not going in their favour, they began to erect scaffolding from which they could bravely storm the castle itself. But God is good as well as just. He overcame their valour, and on the same day they prepared an assault against the Christians, who lived within the castle, the glory of God appeared in manifestation above the church within the fortress. Those watching outside in that place, of whom many still live to this very day, say they beheld the likeness of two large shields reddish in colour in motion above the church." (1)

CE 919 In Hungary spherical objects shining like stars were reportedly traversing the sky.

CE 927 "In 927 the town of Verdun, like the whole eastern part of France, saw fiery armies appearing in the sky. Flodoard's chronicle reports that they flew over eastern Reims on a Sunday morning in March. Similar phenomena happened several times under King Pepin the Short, under Charlemagne, under Louis I, the Debonair. These sovereign's capitularia mention penalties against creatures that travel on aerial ships." (2)

29.07.966 A luminous vertical cylinder was observed over the ocean.

1034 A cigar-shaped object surrounded by flames flew over Europe following a straight path from south to east, before turning towards the setting sun. (3)

01.01.1254 There "appeared in the sky a kind of large ship, elegantly shaped, well equipped and of a marvellous colour" over St. Alban's Abbey on a clear night according to Mathew of Paris' Historia Anglorum. (4)

In France. Jacques Duclerc, a chronicler and counsellor to Duke Philip the Good, provided an account of this sighting in his Memoirs of a Freeman of Arras: "A fiery thing like an iron rod of good length and as large as one half of the moon was seen in the sky for a little less than quarter of an hour." (5)

1520 A round shape with a rotating light or beam, accompanied by 'two fiery suns' was described over the skies of Erfurt. (6)

1752 "Luminous sphere coming out of a bright cylinder" were noted in Augermanland, Sweden.

09.08.1762 An object was observed in front of the Sun by two different observatories in Switzerland.

30.08.1783 An object was observed over Greenwich that 'gave birth' to eight satellites which disappeared slowly towards the Southeast.

07.09.1820 Francois Arago wrote of this date in the Annales de chimie et de physique: "Numerous observers have seen, during an eclipse of the moon, strange objects moving in straight lines. They were equally spaced and remained in line when they made turns. Their movements made a military precision."

07.1868 At Capiago in Chile and aerial construction was observed emitting light with an engine noise (7).

22.03.1870 An object was seen from the ship "Lady of the Lake" in the Atlantic Ocean that appeared to be a light-grey coloured disk that flew against the wind (8).

29.08.1871 Astronomer Trouvelot of the Meudon Observatory noted a number of objects that resembled those witnessed at Nuremberg and Basel. Among the objects he saw was a circle that first seemed about to fall, then descended "like a disk falling through water." (9)

24.04.1874 A Professor Schafarick saw above Prague "an object of such strange nature that I do not know what to say about it. It was of a blinding white and crossed slowly the face of the moon. It remained visible afterwards." (10)

23.03.1877 Reports of a "cloud cigar" at Vence, France where "fiery speres, extremely luminous, came out of a cloud of peculiar shape and went slowly toward the north for one hour." (11)

1883 The children and teacher at an elementary school at Segeberg reported seeing two fiery spheres in the sky with the apparent diameter of the full Moon. They were reportedly travelling side by side and not very fast, on a north-south course.

1.11.1885 The following report appeared in L'Astronomie: "M. Mavrogordato, of Constantinople, calls our attention to the following strange observations which have been communicated to him:

(i) On November 1, at 9:30pm, there was seen, west of Adrianople, an elongated object giving off a strong luminosity. It seemed to float in the air and its apparent disk was four or five times larger than the full moon. It travelled slowly and cast light on the whole camp behind the station with a brightness about ten times greater than a large electric bulb.

(ii) In the morning of November 2, at dawn, a very luminous flame, first bluish, then greenish, and moving at a height of five to six meters, made a series of turns around the ferryboat pier at Scutari. Its blinding luminosity lighted the street and flooded the inside of the houses with light." (13)

12.11.1887 L'Astronomie reported "On November 12, 1887, at midnight, near Cape Race, a huge ball of fire appeared, slowly emerging from the ocean to an altitude of sixteen to seventeen meters. This sphere started moving against the wind and stopped close to the ship from which it was observed. Then it rushed away in the sky and disappeared in the southeast. The whole observation had lasted five minutes."

08.01.1888 Luminous bodies were seen flying through the sky in lines for one hour, according to the Memoirs of the Minor Brothers of Ragusa, Italy.

1893 Several observations of disks and wheels at sea were made mainly between Japan and China (14).

20.12.1893 A huge 'wheel' emanating noise appeared in the United States. It remained motionless for fifteen minutes before departing.